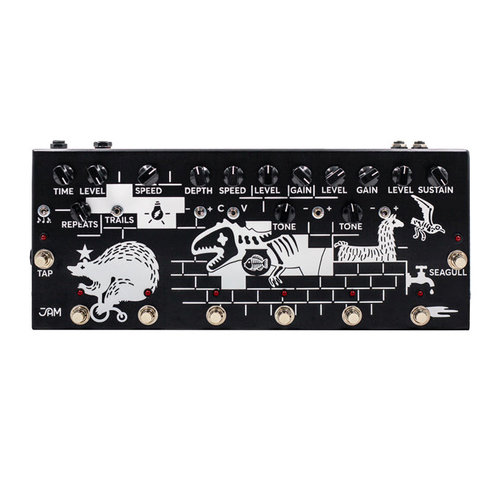 All JAM essentials in one big pedal enclosure Read more

Pink Flow What you hold in your hands is our proposed combination of JAM pedals designs that equip you with the essential tools to not only bring your “Pink” lines to life, but lift them to a whole new level.It offers a future-proof and versatile array of effects that will help you “Shine On” in most live and recording situations you might find yourself in down the road ! FEATURES In seeking to make the Pink Flow as versatile as possible, we have proceeded to introduce the following features : · TAP tempo with subdivisions on the Delay Llama. · Delay Llama trails mode. · External TAP tempo IN. · Send / Return FX loop between the Overdrive and Modulation sections for you to place other effects in. · True Bypass Relay Switching. SIGNAL CHAIN 1. Seagull: the seagull effect heard in “Echoes”! To properly operate the Seagull effect: ― Make sure your guitar has passive pickups. ― Engage the effect with the footswitch. ― Turn your guitar’s volume knob all the way up. ― Change the effect’s pitch by manipulating your guitar’s tone pot. 2. Dyna-ssoR: A realisation of our inspiration to combine a Ross Compressor® and a vintage DynaComp® using the extremely rare NOS CA3080 chip. ― LVL controls the Dyna-ssoR’s level ― SUS sets the amount of compression / sustain. 3. Tubedreamer: a JRC4558D equipped 808 style overdrive offering a carefully tuned, midrange frequency register, that delivers warm and rich overdriven sound through any amp. Features a highgain toggle-switch. ― LVL controls the Tubedreamer level. ― TONE adjusts the tone. ― GAIN sets the gain level. ― Toggle-switch selects between High and Low Gain stages. 4. Red Muck: a Fuzz / Distortion pedal, inspired from the circuits of the ’71 “triangle” and the later “Red Army / Civil War” Muff. ― LVL controls the Red Muck’s level. ― TONE adjusts the tone. ― GAIN sets the gain level. ― Toggle-switch selects between symmetrical or asymmetrical clipping. 5. FX Loop Send / Return: Connect other effect/s to place them AFTER the Red Muck and BEFORE the WaterFall. SEND goes to said pedals’ input and RETURN receives the output. 6. WaterFall: a smooth, lush-sounding Chorus / Vibrato pedal, featuring BBD chips, with 2 toggle-switches, one to select between chorus and vibrato modes, and another to switch to a wetter effect. ― DEPTH sets the depth of the effect ― SPEED sets the speed of the effect ― LEFT toggle-switch selects between subtle and more intense modulation response. ― RIGHT toggle-switch selects between Chorus and Vibrato modes ― Internal Trimmer sets the maximum modulation speed. 7. Ripple: Smooth, sweet and transparent 2-stage phaser pedal, with a single SPEED control setting the effect’s rate. 8. Delay Llama: A fully analog, BBD chip, delay pedal with a maximum delay time of 600ms, Tap Tempo, HOLD function, and Delay Time expression pedal input. Features a two-position toggleswitch for trails mode ON/OFF and external Tap Tempo input ― TAP Footswitch sets the tempo of your repeats. Prolonged pressing will engage the HOLD function. ― Sub-division toggle-switch for tapping in 3 different note values ― TIME sets the delay time ― LVL sets the MIX level of the repeats on top of the dry signal. ― REPEATS sets the amount of repeats ― TRAILS toggle-switch: right side is ON / left side is OFF, allows for the effect’s repeats to fade out gradually after you have turned the Delay Llama off. There is also an internal trimmer to determine the decay of the Trails! ― Internal trimmer to adjust the maximum amount of repeats dramatically affecting the HOLD function’s response. ― TAP input allows you to remotely control the tempo of your repeats ― EXP expression pedal input to control the delay time (we recommend our EXP1 expression pedal for ensured compatibility).